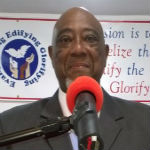 Jocephus is a native of Chattanooga, Tennessee where he attended and graduated from Howard High School.  Following graduation he attended Fisk University where he obtained a Bachelor of Science Degree in Health and Physical Education.
While at Fisk he met and married Carol Ann Cochran.  God has blessed this union of 47 years with two sons, Jocephus III and Damon Morris Cochran.

In 1971 Jocephus successfully managed and coordinated a federally funded Model Cities Program in the city of Chattanooga, Tenn.
In 1973 he accepted a position with the IBM Corporation in Cherry Hill, NJ.  During the next 16 years his scope of responsibilities included sales and multiple levels of management in Administration and Operations.
In 1990 he accepted a position with Jiffy Lube International in Mt. Laurel NJ.  During the next 11 years he received numerous assignments which include District Manager of both company and franchise operations, Regional Manager of Service Centers in Southern New Jersey and Philadelphia, Pa and Manager of Human Relations. In 2001 he retired from the company as the Human Resource Manager for the Eastern and Western Divisions.